One Life at a Time: Zoom Tutoring by Educational Student Tours 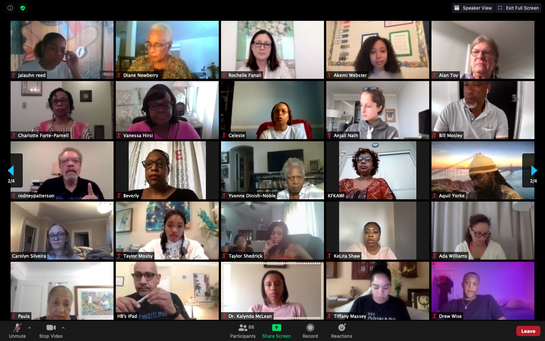 ​     The film tells the story of a boy on a beach throwing washed up starfish into an ocean. Nearby, a puzzled man tells the boy his efforts won’t make much of a difference to the multitudes of stranded sea stars.

​     ​Undeterred, the boy picks up another starfish, flings it into the ocean, and patiently tells the man: “It made a difference to that one!”

It was the perfect lead in for volunteers who spent part of a Saturday afternoon preparing to help college applicants. But it came as a major adjustment for Yasmin, a former community college counselor, vice chancellor, college president, and co-founder of Educational Student Tours (EST) whose annual tours of Historically Black Colleges and Universities (HBCUs) for low income and foster youth have been grounded for the first time in the 33 years she and her husband Gregory have been organizing the trips.
Elvia Perez, a recent Marshall alumna, tells us
​what she has been doing during the COVID-19 pandemic. 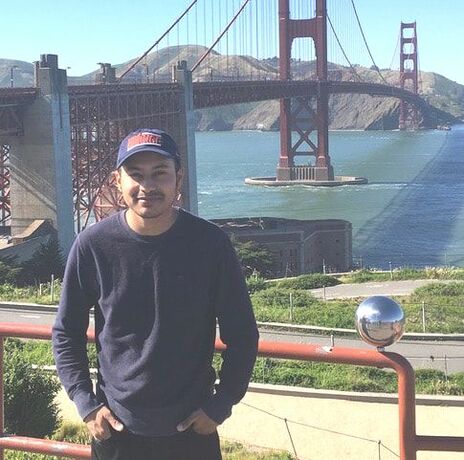 A special shoutout to five CollegePath LA committee members who are set to graduate from John Marshall High School on June 9, 2017. The committee, which meets weekly on campus, plays a vital role in supporting our program. Student participants help plan, promote and staff events, including workshops to write college essays, complete financial aid forms and explore professional careers.
Following graduation, the students join CollegePath LA’s alumni group and return to Marshall periodically to tell students about their college experiences. CollegePathLA organized the committee in 2011 to create student leadership opportunities and to strengthen connections with the volunteer community.

Here are some committee members’ thoughts about their CollegePathLA experience.

“Being a part of CollegePath LA, I learned that in my community there's always going to be someone who is willing to help, and that helping other people is an important part of being in a community.
I also learned how to collaborate in a group and to plan events. This had a really big impact on my self-esteem because it showed me that my input mattered and that I had good ideas.”
---Janelle Dela Cueva

“As part of the committee, I had to encourage students to come to our events. Because of this, I learned how to deliver a message. I gained more confidence in front of others.”
---Kevin Bacon

“I learned how to network and make connections. I was able to use these skills at the career fair when I had to go up to people and tell them about myself.”          ---Maria Soriano

“I learned social skills by walking up to random people and asking them to come to our events.”
---Janet Choi
Sharon Stricker Achievement Award 2016

​     Susan Philips, director and co-founder of CollegePath LA, is being honored for her contributions in developing college and career access programs at two Los Angeles high schools.
The award will be made on Sunday, November 13, at the 21st annual L.A.C.E.R. Afterschool Program fundraiser brunch. Susan will receive the Sharon Stricker Achievement Award for her efforts at Hollywood High School and Fairfax High School.
L.A.C.E.R. (short for Literacy, Arts, Culture, Education & Recreation) was founded in 1995 to provide underserved students at Los Angeles middle and high schools with free arts, athletics and academic activities after school.
Sharon Stricker, L.A.C.E.R. co-founder and former executive director, will present the award. Offering students help with college and career exploration has long been a dream of Sharon’s. Susan will be the first recipient of the award.
The fundraiser brunch will be held on Sunday, November 13 at 11 a.m. at the Avalon Hollywood, 1735 Vine Street, Hollywood. Click here for more information, to register for the event, or to make a donation. 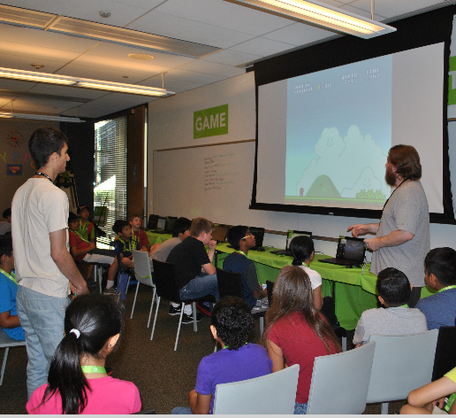 ​     Over the summer I was a paid instructor at iD Tech camp, which introduces kids to robotics, film, programming and game design, among other technologies. I worked at both UCLA and Caltech, alternating between the two campuses.
The students, ranging in age from eight to 17, had signed up for weeklong sessions. I have a lot of experience with technology and consider myself a fairly big geek. As a result of this knowledge, I was asked to teach a different course almost every week.
I heard about the job at the University of California, Santa Barbara, where I’m a senior this year, majoring in computer science. I completed an online application (https://www.idtech.com/jobs) and was selected for a telephone interview. One of the questions was, “What would you nickname yourself?” I replied, “Binary,” which became my name at camp.
Having the opportunity to pass my knowledge on to a younger generation was one of the most rewarding experiences of my life. I will always remember the smiles on those kids’ faces. The iD Tech staff was extremely supportive and spread nothing but positive vibes.
Among the programming languages I taught were C++, Java and Objective C. I also taught game design and development software, including Unity, Unreal Engine 4 and Shootmania. Teaching so many different subjects was a great experience, but very challenging. I had to prepare a completely new lesson plan every week.
We usually spent the first half of the week learning new concepts and getting accustomed to the software. The remaining half I helped students brainstorm ideas for their own personal projects. Kids love being creative. From there on out I would guide them as they completed their projects.
On Fridays, the last day of each session, we had a big family showcase. Family and friends would come check out all the awesome knowledge the students learned and applied to their own creations. The level of excitement was always high and it is an experience I won’t ever forget. 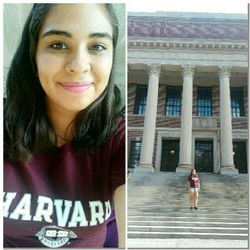 My experience working this summer at Harvard Medical School and Boston Children’s Hospital was the most academically challenging experience of my life. It felt like I was in another world...and I loved it! I met so many wonderful, intelligent people full of dedication.
My mentor was Dr. Maria Lehtinen, whose lab is part of the Department of Pathology at Boston Children's Hospital. Her neuroscience research focuses on the mechanisms that regulate brain development and neural stem cell specification. The lab is affiliated with Harvard Medical School and shares instruments with another HMS lab.
It was inspiring to work with Dr. Lehtinen, a woman scientist who has overcome personal hardships of her own. She pushed me to master concepts/techniques at a pace I would never have thought myself capable. I studied circadian gene expression in the choroid plexus of the mammalian embryonic brain using a mouse model. I learned to handle mice and dissect their brains.
At the end of my research and cramming study sessions with other HMS students, I marveled to myself: "Hey, you got this!" Near the end, I was engaging actively in discussions and contributing ideas. I presented my research at the National Institutes of Health in Bethesda, Maryland and was invited to visit inside the White House in Washington D.C.
My mentor was impressed with my work and invited me to return. So next summer I will be working at Harvard again!
I learned about this summer opportunity, called STEP-UP, through the coordinator of the Latino and African American Internship Program at Children's Hospital Los Angeles. Both LA-HIP and STEP-UP are for high school students. STEP-UP accepts undergraduate students as well. The application consists of a personal statement, a few short essay questions, transcripts, and two letters of recommendation (for college students one has to come from a professor).
STEP-UP provides a $4,500 stipend for the summer. The program paid for all of my travel expenses from LA to Boston and then to Maryland/Washington D.C and back home. In Boston I rented a room in an apartment with two other Harvard medical students that I found on Facebook (there is a page where people post rentals and summer sublets). I used my stipend to cover my rent expense.
Boston is a beautiful city! I also visited New York, New Hampshire, Rhode Island, Cape Cod and Nantucket Island. Now, I really wish I had applied to colleges in the East Coast. I wouldn't mind living in the East for graduate school...who knows! 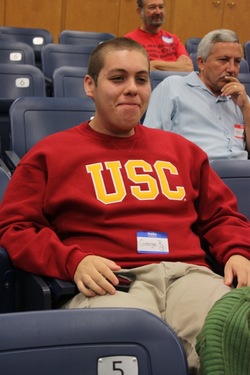 In 2010, Jorge Rodriguez was an ambitious high school senior navigating his way through the daunting gauntlet of the college application process. A teacher put him in touch with Susan Phillips and Lori Zimmerman, who helped him finalize his essays, whittle down his choices and successfully gain admittance to USC.
Rodriguez expresses the prevailing sentiment that led Lori and Susan to the ground floor of CollegePath LA: “Students had to take initiative, and if they didn’t do that at an early age, they would get discouraged later on.”
He joined a small focus group of students that met at Susan’s house with a clear goal of intervening early in the college application process. “We didn’t want to wait until panic set in,” he says. Together, the group designed a pilot program and curriculum. It came up with a name: CollegePath LA was born.
While he was a student at USC, Jorge served as a coach for several Marshall High School students and helped CollegePath LA expand its mission to reach a broader student population. After graduating from USC in 2014, Rodriguez accepted a position as a science teacher at Jordan High School.
“It’s a very different place,” from Marshall, he says. “We’re fighting back against a lack of motivation, a lack of college desire, and that manifests itself in problems with drugs, alcohol, high dropout rates, and low expectations. It’s a real challenge.”
It’s a challenge that Rodriguez has met with the determined resilience that he brought to CollegePath LA in its infant stages. “I’ve been able to get them to care, to reverse expectations,” Rodriguez reflects. “I think CollegePath is a key factor. I’ve met so many people with different perspectives.
Rodriguez continues to work with CollegePath LA, now as a mentor rather than a student. He tutors Marshall kids in chemistry, while teaching a full load. He pairs them with CollegePath LA coaches. He attends alumni meetings.  “What I love most about [CollegePath LA] is that the relationships don’t end on graduation day. It’s for life,” he says.